Conversations on Citizenship is a "collection of brilliant threads, tied together by editors John O'Brien and Carol Blessing around the issues of the citizenship of people with disabilities and of overcoming the barriers that are still preventing full access to society," (Simon Duffy, The Centre for Welfare Reform). The book is a series of transcriptions of carefully selected video-taped interviews with key leaders from the Inclusion movement that shows how the history social injustice has been instrumental in turning moral outrage into practical tools for creating a fairer and more inclusive society.


An excerpt from Conversations on Citizenship & Person-Centered Work:

If we had not already used the title, this collection of interviews would have been called Voices of Experience.* Those who responded to Carol Blessing's invitation to reflect on their practice of supporting personal and organizational change have contributed to, and learned from, deep changes in their overlapping fields of organization development, community organizing, support for employment, and planning and working with people with disabilities in person-centered ways. Their work for social change has continued through decades, yet no one feels like their work is done. Each voice in the chapters that follow is distinctive, but some common threads appear over and again. Here are eight. 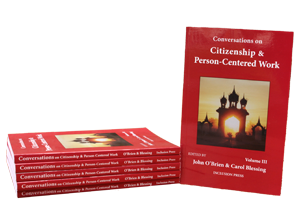 To purchase this book, visit www.inclusion.com.

"If there was ever a time when we need to 'remember the soul of our work', this is it. For readers who don't always start at the beginning of a book - like me - can I particularly draw attention to pages 124&125 where O'Brien reworks a little what for 30 years we have been calling the 'five accomplishments', starting now from five valued experiences - belonging, choosing, contributing, sharing ordinary places and being respected - as a simple but powerful way of keeping us focused on what is important."

"The Centre for Welfare Reform's biggest debt is to the social innovators whose ideas are described in this book. In a series of interviews with the key personalities from the Inclusion Movement, we discover how moral outrage at social injustice has been transformed into practical tools for creating a fairer and more inclusive society."

"I just got my copy of the book delivered here in Australia...I've not been able to put it down... I think it is quite brilliant and THE most helpful book I've read on the topics... it has the clarity and wisdom of experience...it absolutely rings with honesty and hope...and it expresses the heartfelt humanity that is, I think, an expression of love for the work...everyone who does this work needs to read it... thank you so much for it"